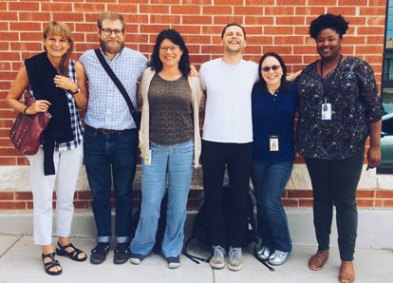 SOAR, for the unfamiliar, is a disability application fast track process for people close to or currently experiencing homelessness. This process adds a few more forms, medical records compiled by the caseworker, and a written narrative called the Medical Summary Report that can when signed by a qualified medical professional, become medical evidence added to the applicant’s file.

One of the reasons Integral Care is successful is because as part of their team of social workers and case managers, they have a dedicated SOAR specialist, Suzie Brady, who is also the Travis County local lead. Suzie holds a monthly SOAR Support Meeting, where caseworkers doing SOAR applications can meet, discuss challenges and successes, and find guidance from one another as they go through the process of completing applications. These monthly meetings are designed to be casual, open, constructive, and, as always, client confidentiality is held to an utmost importance.

Along with more case managers at Integral Care becoming SOAR certified, this past semester they were able to get two interns through the University of Texas at Austin’s School of Social Work. The team gives huge congratulations to Josh Kivlovitz and Brelynn Thomas. “They each completed their internships and each had two SOAR approvals!” The team would also like to thank Tess Bernhard, an Americorps member working for Trinity Center in Austin – she also just got word of her first SOAR approval. “She has done some amazing work with individuals experiencing homelessness in Austin, and we will miss her (this is her last week)!”

Congratulations to Integral Care, Suzie, and the SOAR team for doing an amazing job!

As the SOAR State Lead, THN is working on ways to improve SOAR in Texas. If you have any questions on starting your own SOAR Support Meeting, or if you would like guidance on how to implement a dedicated SOAR specialist into your team, feel free to contact Jen Hellow, VISTA SOAR State Coordinator at vista_jen@thn.org, or the state SOAR lead, Jennifer Paulsen at jennifer@thn.org.

Texas SOAR Program is Taking Off

One thought on “Texas SOAR Program is Taking Off”

This site uses Akismet to reduce spam. Learn how your comment data is processed.