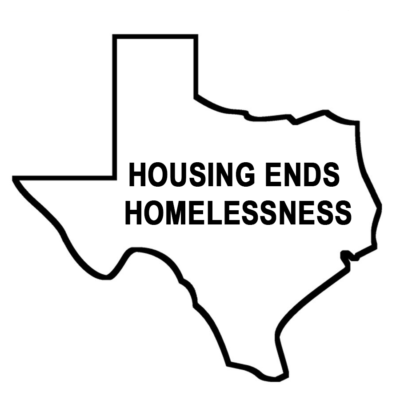 Texas Homeless Network (THN), along with partners across the state, is releasing this statement in response to recent comments in the press by Texas political leaders regarding homelessness. We appreciate the attention our leaders are bringing to this issue. Awareness is important but without action, there will be no progress.

All of us share the common goal of making homelessness rare, brief, and if it happens, a one-time event. It may sound lofty, but Texas communities are already making great strides towards meeting that goal. While communities may take disparate approaches to combat homelessness, one common theme connects all: HOUSING. What ends homelessness and makes it a singular event for Texans is supportive housing, deeply affordable housing, and the deployment of deep housing subsidies in opportunity areas.

Many communities have successfully ended homelessness for target populations, but housing was the key piece. Houston, Austin, San Antonio, and most recently Abilene, have all effectively ended Veteran homelessness. Those communities accomplished this by securing housing and placing people in those units quickly while making services available to those in need of support. We know this can be replicated in other areas and with other sub-populations but we need housing.

When Texans have the necessary tools, such as a place to call home, physical and mental health care, job opportunities to reach their full potential and, when necessary, shelter to maintain stability while waiting for a home, they are able to regain health and independence. Our communities are stronger when everyone thrives. We encourage communities and the state of Texas to engage in constructive conversation and collaborative planning. Ultimately, that’s the only way communities have had success in making homelessness rare, brief, and a one-time event for those unfortunate enough to experience it. Quite simply, when a Texan is housed, they are no longer experiencing homelessness.

To sum it up, housing ends homelessness.