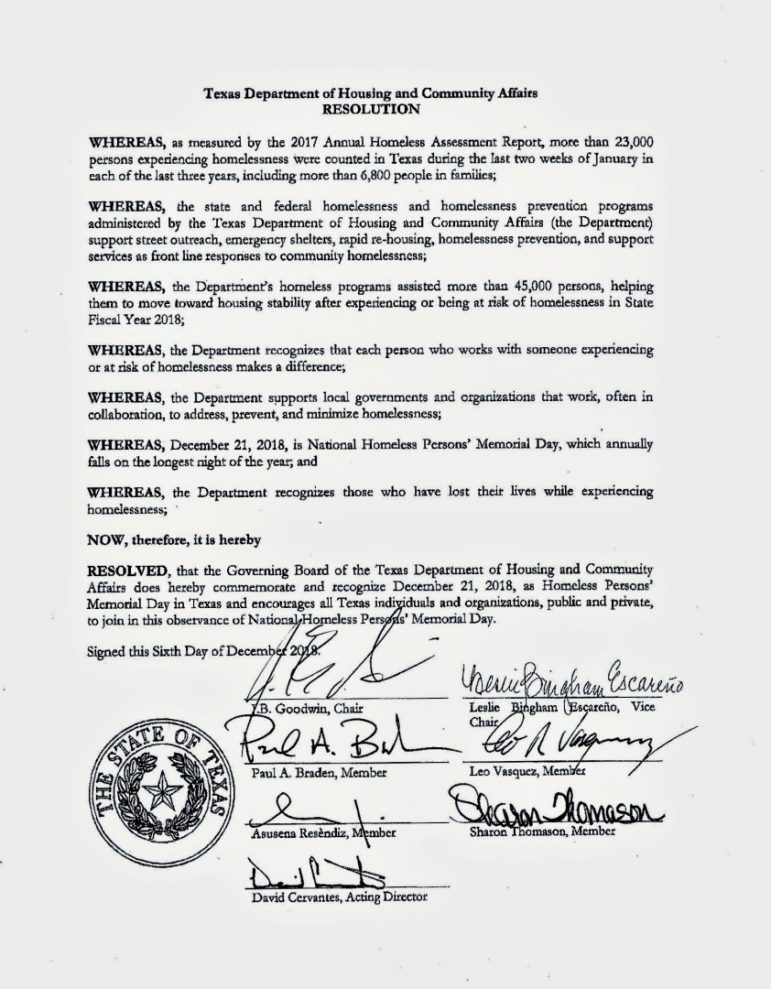 Today is National Homeless Persons’ Memorial Day. Visit this blog post to see news stories from the past year highlighting some of the people who have died on the streets in 2018.

Below are stories a couple of homeless service providers shared about the people they knew and worked with who died.

Rachel Berger’s smiling face was familiar to homeless service providers in Victoria. It is equal parts comfort and heartbreak to know that she had family who loved her, community resources, friends on the street,  and caring advocates but spent her last night sleeping on concrete. It is a hard truth to understand that resources, support, and compassion are simply not always enough. As advocates, however, perseverance is the only way forward. Continued hope sets in motion the desire to reach for the door and head to the street to make stable housing affordable and available for another who is also dear to family, valued, and deserving.

There was no news report filed for the next story.

(Writer’s note: to maintain confidentiality and respect for the dead, the name of the person I worked with has been changed to Frankie, which means free one. h/t to Laura Evanoff of ECHO for the suggestion.)

Toward the end of my AmeriCorps term with THN as the SOAR State Coordinator, I showed up on the doorstep of Sunrise Homeless Navigation Center with a proposal to start a SOAR program. The Navigation Center is housed within Sunrise Community Church, the “weirdest little church in Texas.” Sunrise does more for the homeless population in Austin than most agencies, and does so on a shoestring budget with an army of volunteers. I committed to six months with them; a year later and I’m still there. I’ve watched a mobile health clinic collaboration between a number of agencies grow exponentially in this past year, that just received a $2.3M SAMHSA grant, and I’m thrilled to be a part of the growth. I don’t believe in God and it’s my absolute pleasure to spend time each week working within this church because everything we do is rooted in the idea of helping the person standing outside the door.

But this is about death on the streets and I digress.

I found Frankie on my first day at Sunrise, I picked him out of the crowd on the patio. He was sitting hunched over on a picnic table smoking a cigarette and drinking a cup of coffee, wearing a brown coat and blue jeans, things I’d come to learn were standard operating procedure for him. I can’t explain why I picked him, my decision might have been based on pure intuition, or Mark said “you should work with that guy,” one of the two.  I asked him his name, told him why I was there, and asked if I could help him get on disability. Over the next seven months, we worked together almost every week; despite his consistent paranoia, he managed to find his way to Sunrise to meet with me on Thursdays. He told me he trusted me completely and I believed him. I told him how proud I was of him and he believed me.

You have to understand, what it was like to look into eyes the color of the ocean on the Florida coastline, eyes that, despite years of torture at the hands of his own mind, would still sparkle every once in a while. You have to understand, and some of you reading this do, what it was like to work with a man who had destroyed his life, who suffered from Paranoid Schizophrenia, what it was like to have this man trust me when he had had no one to trust in years. No one cared anymore. His family was tired of his antics. He lived in a camp he constructed down in way South Austin; the city demolished it a few months after we started working together. A street sign emblazoned with his name, from out near the family farm out in the country, hung at the front. I know this because I saw a picture right before it was demolished. He moved under a bridge after this happened. He didn’t like being under the bridge because he was alone and out in the open, he really wanted a friend..

Most of all, I need you to understand the gentle nature of this man, who, despite everything he had stacked against him, despite what regular methamphetamine use did to his already-damaged mind, and despite how broken he’d felt for so long, told me he didn’t want to die. He wanted housing. He wanted stability. We would work on it together. He wasn’t sure he deserved it but he wanted a door to close and have a place to hang his hat.

Most of the time, mean men on motorcycles followed him around; this is what scared him the most. Sometimes he threw rocks at them to make them go away, other times he’d run terrified through the woods. It was through his commitment to coming to see me on Thursdays that we were able to connect him to regular medical services. He started taking his meds as prescribed, and began to develop insight into the fact that his stomach medication made his stomach feel better when he took it and then the men on the motorcycles started staying away, so he kept on his meds as well as he could. I felt more and more proud of him as the months went on.

One day, he says to me, “the cars following me, they’re just waiting for the right time to kill me.”

His death was ruled a suicide. I’ll never believe that. The story goes, so far as I heard it, he was sitting with some friends at a major intersection in South Austin, he had $40, he went to the woods and came back without $40 not feeling very well. Meth had been making him sick lately. He went into the restaurant on the corner, asked to call for an ambulance, and waited for them to arrive. In the time he waited for the ambulance, some 20 minutes, he still did not feel well and he laid down in the street. Two cars missed him and the third didn’t and I’ll never find out the identity of the person who killed him when all I want to do is tell them how good he was, that he wasn’t nameless, that he mattered so much to at least one person.  It would probably make them feel worse, though, so this way is for the best.

I’m still struggling with his loss. I avoid the intersection. Someday soon, I’ll tattoo something he said to me above my heart because both his death and his life have permanently impacted my life. One thing I know about grief is that the depth of it never leaves, it just becomes easier to manage with time.

Here’s to time and to Frankie. My friend, you are missed and loved and I promise I will use your death as fuel for the fire to keep me going even when this work is hard because not one more person needs to die on the streets.

Honoring those who have died on the streets in 2018