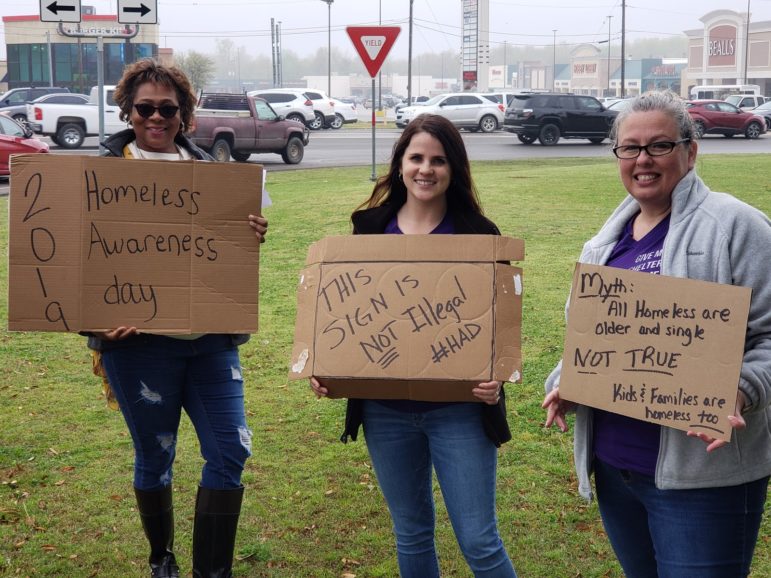 The Texas Balance of State encompasses a huge swath of an already enormous state – 215 counties, or roughly 60 percent of Texas’ population. Though this region and its area and population are diverse, all communities share the burden of affordable housing shortages and operating homelessness resources on shoestring budgets. They’re also increasingly facing another commonality: local criminalization of homelessness.

Since 2011, there has been a national trend toward criminalizing actions associated with homelessness, including sitting or lying down in public, loitering, panhandling, and even sleeping in a car. Within the Balance of State, at least six cities ban panhandling at intersections, with Pleasonton, Boerne, and Waxahachie going as far as requiring permits to solicit cash donations from passersby.

Map of localities that have criminalized homelessness. Want to add a location? Email jen@thn.org with a link to information on the ordinance and name of the city.

Multiple local homeless coalitions in the Balance of State have faced such ordinances, with a few successfully lobbying their local commissioners to oppose their passage. For instance, the Central Texas Homeless Coalition opposed a 2017 ordinance that banned loitering in public places. The bill targeted the large number of persons experiencing homelessness loitering outside of the Temple public library. When it was announced that a task force would be formed to research the issue, the coalition drafted a request to be on the panel and submitted a letter opposing the ordinance to their local government officials. The city partnered with Meadows Mental Health Policy Institute to study what the effects of passage could be, and they found that the cost of jailing those that violated the ordinance would cost taxpayers $70 a day per person. That figure did not include the cost of issuing tickets that would likely go unpaid nor the value of police officers’ time spent enforcing such a law. Eventually, the commissioners sided with the coalition and the citywide ban on public loitering did not pass.

Lamar County Homeless Coalition is currently raising community awareness to resist a proposed solicitation ban in Paris, Texas. Although City Attorney Stephanie Harris came out against the panhandling ban because the “Supreme Court of the United States has put significant barriers in the way of panhandling ordinances that is protected by free speech,” the panhandling ban continued to have local support. However, the coalition’s live Facebook question-and-answer forums educating citizens on local homelessness and event during Homelessness Awareness Day is turning the tide – their Facebook videos combined have over 1700 views and over 20 people have inquired about becoming coalition members, with many more expressing their support.

Federal courts have also sided with homeless advocates on this issue repeatedly. In Martin v. Boise, a federal circuit court affirmed states “may not criminalize conduct that is an unavoidable consequence of being homeless – namely sitting, lying, or sleeping on the streets” when there is no practically accessible alternative available, such as a nearby shelter that has space. Communities that lack shelter beds and jail or ticket someone for lying, sitting, or sleeping outside violate the eighth amendment, specifically the “cruel and unusual punishment” clause. Finally, Reed v. Town of Gilbert rearticulated that the first amendment, particularly freedom of speech, protects a person’s right to panhandle in public because “charitable appeals for funds” are covered by the amendment.

Find out if your town criminalizes homelessness

Want to know if your town has criminalized homelessness? Go to the Texas section of Municode Library or American Legal Publishing Corporation, click on or search for your city, then search phrases such as “sleeping in public places,” “begging in public,” or “no sit/no lie.” Other keywords to look for: temporary shelters, sleeping, loitering, camping, soliciting, intersection, sharing food, vagrancy. Email jen@thn.org to add new ordinances to the Texas homelessness criminalization map.

No Safe Place: The Criminalization of Homelessness in U.S. Cities

Policy for Panhandling: How to Encourage Good Panhandling and Discourage Bad

The Criminalization of Homelessness across the Texas Balance of State